A simple, visual check of the traffic light ratings in your PASS PDF report will flag your most vulnerable students who may benefit from pastoral intervention. Your Excel Report will allow you to sort and filter your data with ease.

Whole school, year group and key group analyses will allow you to assess trends across your school, helping you make data-informed decisions about where to focus pastoral support. Analyses are broken down by gender, year group, ethnicity, FSM, SEND, EAL status and your personalised two custom groups. 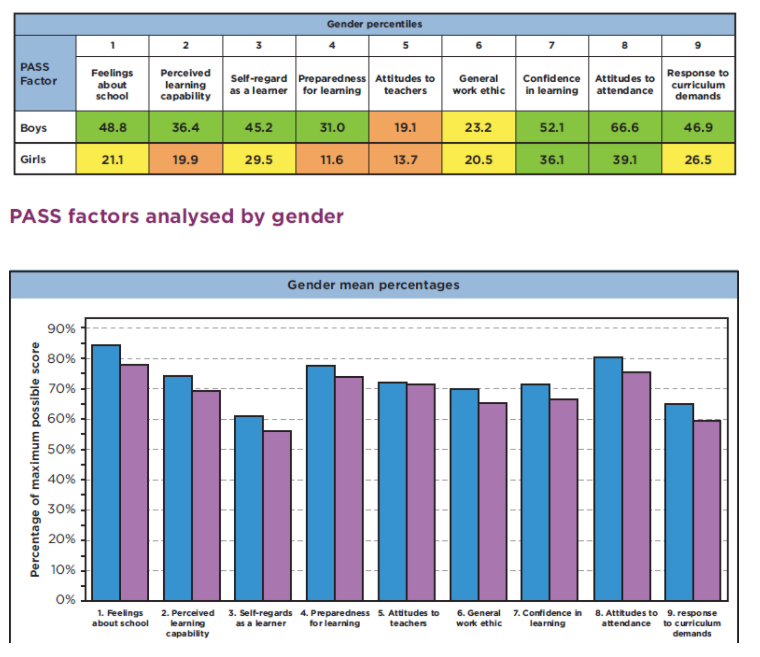 Non-standardised, or percentage, scores are the results of the survey from the school alone and do not include any comparisons with other schools. They are useful for the senior leadership team within the school to obtain an overall view of how students feel about the school as a whole, what they are satisfied with, and where they feel there is room for improvement. Percentage scores are shown in the bar charts. This score is particularly useful when comparing two consecutive surveys to measure change over time.

Standardised percentile scores provide a measure of how the whole school, its cohorts (by year groups, gender and ethnicity) and its individual pupils are doing compared against a national standardisation.

When looking at the scores together, note that the distribution of national scores is not even, and there may be a significantly high number of schools with high levels of satisfaction. It is often small increases in the non-standardised percentage scores that can lead to large increases in percentile scores especially where a school crosses a percentile rank threshold between two surveys. Individual profiles and item level analysis show percentiles only.

The colour coding used in the report should be interpreted as a guide to help schools see at a glance the level of satisfaction that cohorts or individuals have with their school experience. Those found to be in the lowest 5% compared to the UK population should be taken as an immediate concern for the school. The average range of responses lies between the 16th and 84th percentile. Your PASS survey report interprets factor and item responses based on the following percentile values:

Attention should be paid to the exact percentiles shown in the standardised score tables:

A PASS survey report provides a picture of the school from the student’s perspective and may challenge the assumptions held by the school’s teachers, senior leaders and other staff. Successful use of PASS data requires an analysis across factors and regular comparison of the data with the particular context of the school.

PASS: What data is provided?

PASS: What does the data mean?

PASS: Implications for teaching and learning