Lucid LADS PLUS Find out more

This young man, aged 17, who was in a youth offender institution, had a very disadvantaged background and experienced many disruptions to his education from age 11 onwards. His tested reading skills were equivalent to those of an average 12 year-old and his spelling skills in the bottom 1% of his age group. He had poor oral vocabulary knowledge (reflected in his below average verbal reasoning score) but his non-verbal reasoning was in the average range. He had good practical skills and loved tinkering around with cars (in fact, his period in this secure institution was as a direct result of several incidents of taking cars without the owners’ consent). He had plans to become a motor mechanic but needed to improve his literacy skills in order to undertake the necessary training. 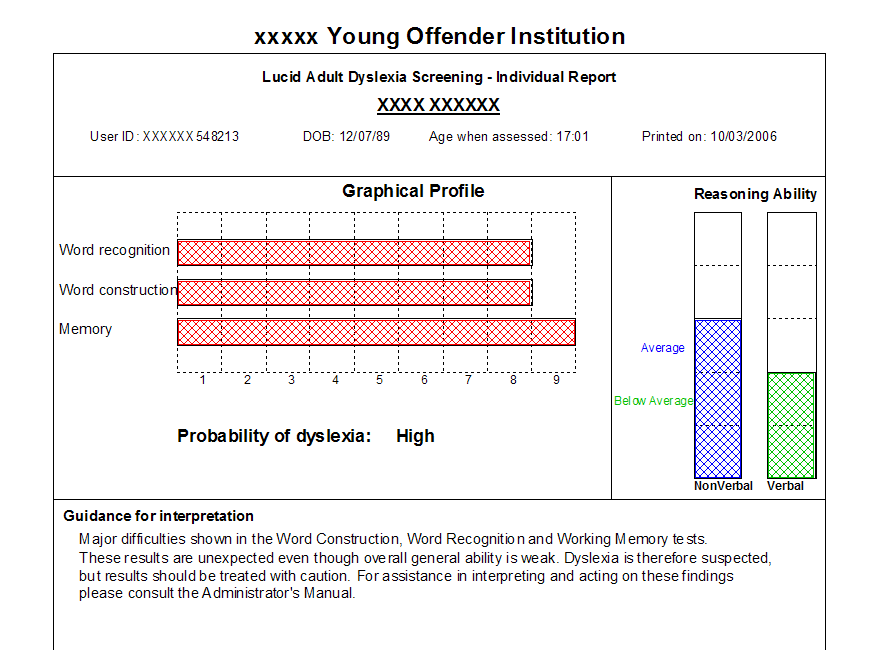 The LADS Plus profile (see Figure 15. Case study I.) shows red scores in all three of the dyslexia-sensitive tests: 8 for Word Recognition, 8 for Word Construction and 9 for Memory. While the score for Word Recognition is understandable in terms of his general low level of literacy, his disadvantaged background, and his general lack of experience with reading, the other two results give a pretty clear indication of dyslexia. The Word Construction test requires not only good auditory memory but also good phonological analysis and sequencing skills, but it not so dependent on reading vocabulary. The skills to do this task are normally acquired in the primary school and if adults experience great difficulty with this it usually indicates that they have dyslexia. The Memory test in LADS Plus not strongly related to reading or spelling skills (and is also independent of non-verbal reasoning ability and oral vocabulary skills). Where adults score high (red bar) on this it is usually an indication of dyslexia, especially when there is corroborative evidence of phonological difficulties (as there is in this case from the results of the Word Construction test). Hence this young man showed strong evidence of dyslexia, and this was subsequently supported by findings of further psychological tests, including phonological tasks (Spoonerisms, etc.) on which he was very poor. He is currently having special tuition for his literacy difficulties that carefully addresses his problems dealing with phonological information, and although he is still struggling he is making progress and has not abandoned his hopes to pursue a career in motor mechanics.

Where the profile contains a high score for word recognition and a moderate score for word construction but a low score for memory it is worth exploring with the client whether or not their difficulties are the result of a lack of opportunity to develop literacy skills due to such factors as mentioned previously which might well indicate a true lack of basic literacy skills as opposed to a dyslexic difficulty. Taking a similar approach to developing skills as that which would be taken with a dyslexic client may still be appropriate and bring significant benefits. To illustrate this we consider the case of a young woman aged 23 in a basic skills class. She was a refugee who came to Britain in 1999, during the war in Bosnia. She has been working as a kitchen helper and subsequently waitress in a hotel, during which time her spoken English has improved considerably. Recently she decided she needed to be able to read and write in English to improve her employment prospect and so has been attending adult literacy education classes. As a routine measure, LADS Plus was administered and the results are shown in Figure 16. From this it can be seen that her non-verbal reasoning was in the aboveaverage range. However, her verbal reasoning score is low, and her Word Recognition score is high/red (8), indicating that she has little ability to recognise real English words. Both these results probably reflect the fact that there are many aspects of spoken and written English that she has yet to master. But her Word Construction score is moderate/amber (5), indicating that she has acquired some skills in recognising the sounds of syllables and linking them up with her very limited knowledge of English orthography. Finally, her Memory score is low/green (2), indicating that there are no problems with her working memory. The automatic interpretation algorithm has classified this young woman as having a ‘low’ probability of dyslexia. Indeed, her poor performance on Word Recognition is to be expected in view of her background. If we therefore put that result to one side we can see that there is not a great deal of evidence to support the view that she has dyslexia. Her teachers can therefore be reasonably confident that with conscientious application to an adult literacy course, she should be able to develop a satisfactory standard of English literacy as well as continuing to develop her spoken English proficiency. 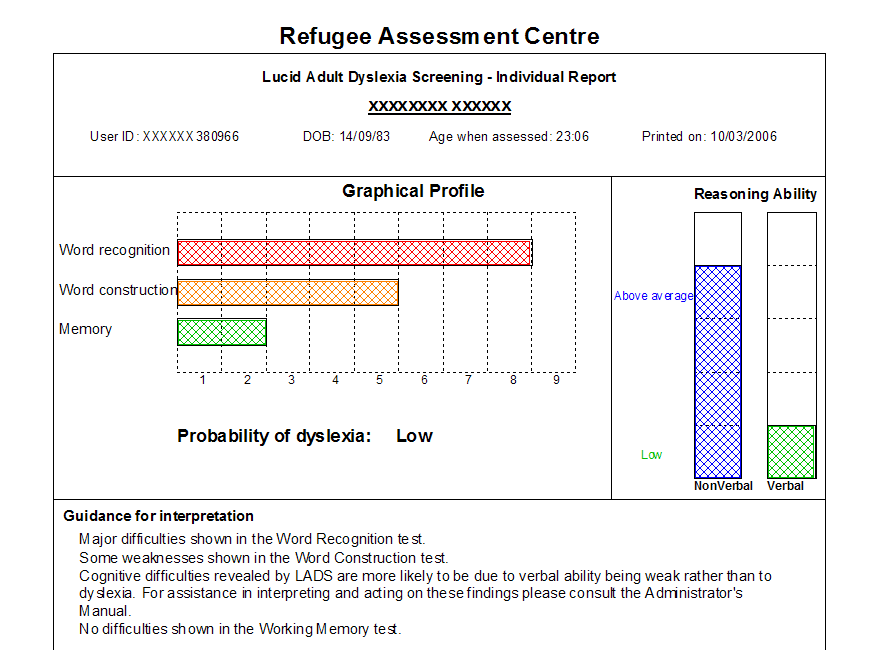 This man, aged 28, was screened using LADS Plus on commencement of a prison sentence. He had a disadvantaged background, disrupted schooling and a history of convictions for various offences before being convicted of burglary. His reading and spelling skills had already been assessed by education staff at a previous secure establishment while he was on remand awaiting trial, and these had been found to be below average. His LADS Plus result is shown in Figure 22. His non-verbal reasoning was in the average range and, as might be expected from his background, his Word Recognition score is high/red (8). But his Word Construction score is moderate/amber (6), indicating some difficulties with phonological encoding. His Memory score is also moderate/amber (5), suggesting some problems with working memory. LADS Plus has classified these results as ‘borderline’, and it can be seen that if the Word Recognition score is taken out of the equation, we are left with two moderate (amber) scores, which are consistent with his below average verbal intelligence and educational background. Since the majority of individuals in the ‘borderline’ category do not have dyslexia, the safest course of action would be to assume that he does not have dyslexia (unless there are indications to the contrary, such as a family history of dyslexia or evidence of early speech and language problems).

Sarah is a 17 year-old juvenile offender with a history of shoplifting and handling stolen goods. No other members of her family have criminal records. Her parents are both in employment and her older brother is an apprentice bricklayer. She has one other sibling: a sister, aged 14, who is doing well at school. Sarah fell out with her parents because of her drug taking habits and as a result left the family home six months ago. At school she had been an argumentative and rebellious pupil who left at age 16 with minimal qualifications. She had been working on a production line in a local factory but was dismissed after a vociferous argument with a supervisor. Sarah is currently being supervised by the Youth Offending Team, which administered LADS Plus as part of routine screening of its clients. Her results show that she has above average verbal ability but low nonverbal ability. LADS Plus has classified Sarah as having a moderate probability of dyslexia. In particular, her very poor Working Memory result is strongly suggestive of dyslexia, and although her Word Recognition and Word Construction results are not typical of dyslexia, they are nevertheless consistent with her above average verbal intelligence.

Lucid LADS PLUS Find out more