Wock assesses auditory discrimination. This ability is very important for acquisition of effective phonic skills and for many aspects of learning which depend on oral communication, including ordinary classroom activities. In literacy development, children first have to be able to hear and discriminate the fine differences between speech sounds in order to learn the relationships between those sounds and the letters of the alphabet. The brain learns to discriminate those speech sounds by experience and exposure to good models of speech in the early years.

In the CoPS research project, Wock correlated significantly with later literacy skills, listening skills and development of ability in phonics. It may therefore be concluded not only that it is a valid indicator but also a good predictor. Wock given at age 5 correlated with all phonics aspects of the Middle Infant Screening Test (MIST) given at age 6:6 (with a significance level of p<0.01); and the correlation with the Word Recognition and Phonics Skills Test (WRaPS) given at age 8 was 0.73 (p<0.01) and with the Edinburgh Reading Test at age 8 was 0.44 (p<0.01). Stepwise regression analyses showed that Wock, together with Rhymes, were among the best predictor variables. For further information on the statistical evidence see Singleton, Thomas and Leedale (1996) and Singleton, Thomas and Horne (2000).

Causes of poor performance on Wock

Poor performance on Wock can result from:

Obviously if the poor performance is attributable to temporary factors then the solution is to retest the student at an appropriate time.

Congenital or acquired hearing impairment can be conductive and/or sensory. In conductive impairment something impedes the movement of acoustic energy through the outer or middle ear (e.g. a malformation of the ear structure, or build-up of wax). In sensory impairment there is damage to the parts of the hearing mechanism involved in analysing sounds (e.g. through prolonged exposure to loud noise, or neural abnormalities of the auditory system due to maternal Rubella). Conductive impairments are often fluctuating and can often be rectified by treatment, whereas sensory losses are permanent although a hearing aid can help in many cases. Children with good auditory sensitivity for low sound frequencies but who have high-frequency loss are often detected late in childhood. This is because in a one-to-one situation or relatively quiet environment they may appear to hear satisfactorily, but in a noisy environment or typical classroom, many sounds are not heard properly, particularly weak high-frequency consonants (e.g. s, sh, f, th, v).

Lack of experience with English

Phonological discrimination difficulties can also arise in cases where children have had to rely on an inadequate or distorted model of English speech in the home. Children from home backgrounds where English is not spoken or is spoken with a foreign accent may not have had the opportunity to learn certain speech sound discriminations that are important in English. It is important to note that under the Children and Families Act (2014) a student must not be regarded as having a learning difficulty or disability solely because the language of the home is different from the language in which he or she is taught [Part 3: Section 20: 4]. Nevertheless, it is important for the teacher to have information on the phonological discrimination skills of students from such home backgrounds, because this pertains critically to the teaching of phonics in English. However, it should not be assumed that all students for whom English is an additional language (EAL) will perform poorly on Wock. Studies of EAL and bilingual students have shown that in many cases they have heightened awareness of speech sounds and may perform very well on Wock. For further information see Interpreting profiles of students who have English as an additional language.

Glue ear (Otitis media) is a group of conditions in which there is fluid in the middle ear, often caused by colds or other infections, and which result in conductive hearing loss and, sometimes, earache. It is common in children up to the age of 6 years, but declines steadily in incidence thereafter. It should be suspected in any student who is frequently inattentive, often says ‘What?’ when asked a question, or who persistently turns up the volume on the television to a level which other viewers find excessive. Children who suffer from glue ear will not have had good models because the sounds they have heard will have been distorted. The effects on phonological discrimination increase with the severity of the glue ear and the length of time for which it has persisted without effective treatment. Chronic glue ear before the age of three tends to delay speech development in a more pervasive manner. However, although the fundamentals of speech and language are already largely established prior to the age of three, there nevertheless seems to be a period from about 3 years to 7 years of age during which the process of learning to make fine phonological discriminations continues to be quite critical. Consequently, glue ear during this time tends to have more subtle but rather long-lasting effects on language and literacy development, even though no gross effects on speech production or reception may be apparent.

Difficulty in processing information at the phoneme level

The predominant theory of dyslexia focuses on the child’s difficulty in processing phonological information (Snowling, 2000; Vellutino et al., 2004; Saksida et al., 2016). There is some evidence that this type of difficulty can also affect speech perception (Chiappe et al., 2001; Hurford and Sanders; 1990; Liu et al., 2009; Manis et al, 1997; McBride-Chang, 1996; Zhang and McBride- Chang, 2010). This is not altogether surprising, because when we perceive speech we have to store the stream of information in short-term memory in the form of a phonological code while we process it. In the Wock subtest, students have to hold two very similar words in short-term memory and then decide which one is the same as the target word, which is also held in short- term storage. It can be seen that if the student experiences an inherent difficulty in generating phonological codes or in phonological information processing (i.e. is dyslexic), this is liable to affect phonological discrimination tasks, such as Wock.

Students who have auditory discrimination difficulties or who show signs of glue ear should always be referred for medical examination if this has not already been done. Medical treatment (e.g. antibiotics to treat infections) or surgical interventions (e.g. draining excess fluid from the middle ear or fitting grommets to facilitate fluid drainage) may result in varying degrees of improvement. Unfortunately, a few children, even with treatment, continue to suffer from intermittent glue ear until adolescence or beyond. In general, however, the problems of glue ear tend to decline (or become less noticeable) as the child gets older. There appear to be various reasons for this – the child develops better resistance to infection, the Eustachian tube that drains the middle ear grows and may be less prone to blockage, or the child develops strategies to compensate for the hearing loss. However, even if the child’s hearing is subsequently found to be satisfactory (i.e. pronounced ‘normal’ following audiometric assessment) it is essential that teachers realise that the student may still experience significant difficulties in discriminating some speech sounds when acquiring phonic skills in reading. This is because the brain has not had the opportunity to learn those discriminations during the critical period. It is the function of Wock to detect such difficulties.

There are many classroom (and home) activities that can be used to develop auditory discrimination, and many of these are also good for promoting phonological awareness. These are described in Teaching recommendations.

An illustration of a case with auditory discrimination difficulties is shown in Figures 33a and 33b. David’s phonological awareness (Rhymes) and auditory discrimination (Wock) skills are very weak, and this also seems to be affecting auditory memory to some extent (Letter names and Races). The recommendations would be (a) referral for hearing assessment (possible glue ear), and (b) regular training in both phonological awareness and auditory discrimination. It would be useful to assess the whole class to see if training could be done on a small group or even whole-class basis, to save time. In reading development, a well-structured multisensory phonic approach would help to avoid auditory confusions, although great care must be taken to ensure that David hears letter sounds and words clearly. If David receives treatment for glue ear, then the CoPS auditory subtests should be repeated at a suitable interval, because it will be necessary to establish whether his low scores on Races, Letter names and Rhymes were simply due to his auditory problems or whether they signal other underlying cognitive problems.

Of course, students with auditory discrimination weaknesses will also suffer other impediments to effective learning. In a typical busy classroom they often will not hear, or may misunderstand, the teacher’s instructions, and so may carry out the wrong task or waste time waiting for instructions that have already been given. In group work, they often will not hear the speech of other students properly, and so may fail to follow group discussion, which can result in them being implicitly or explicitly excluded from real collaboration. The learning opportunities of these students will consequently be reduced. It is the teacher’s job to ensure, as far as possible, that the student with auditory discrimination weaknesses, is not significantly handicapped by these factors. For further discussion of these issues see Watson et al. (1999). 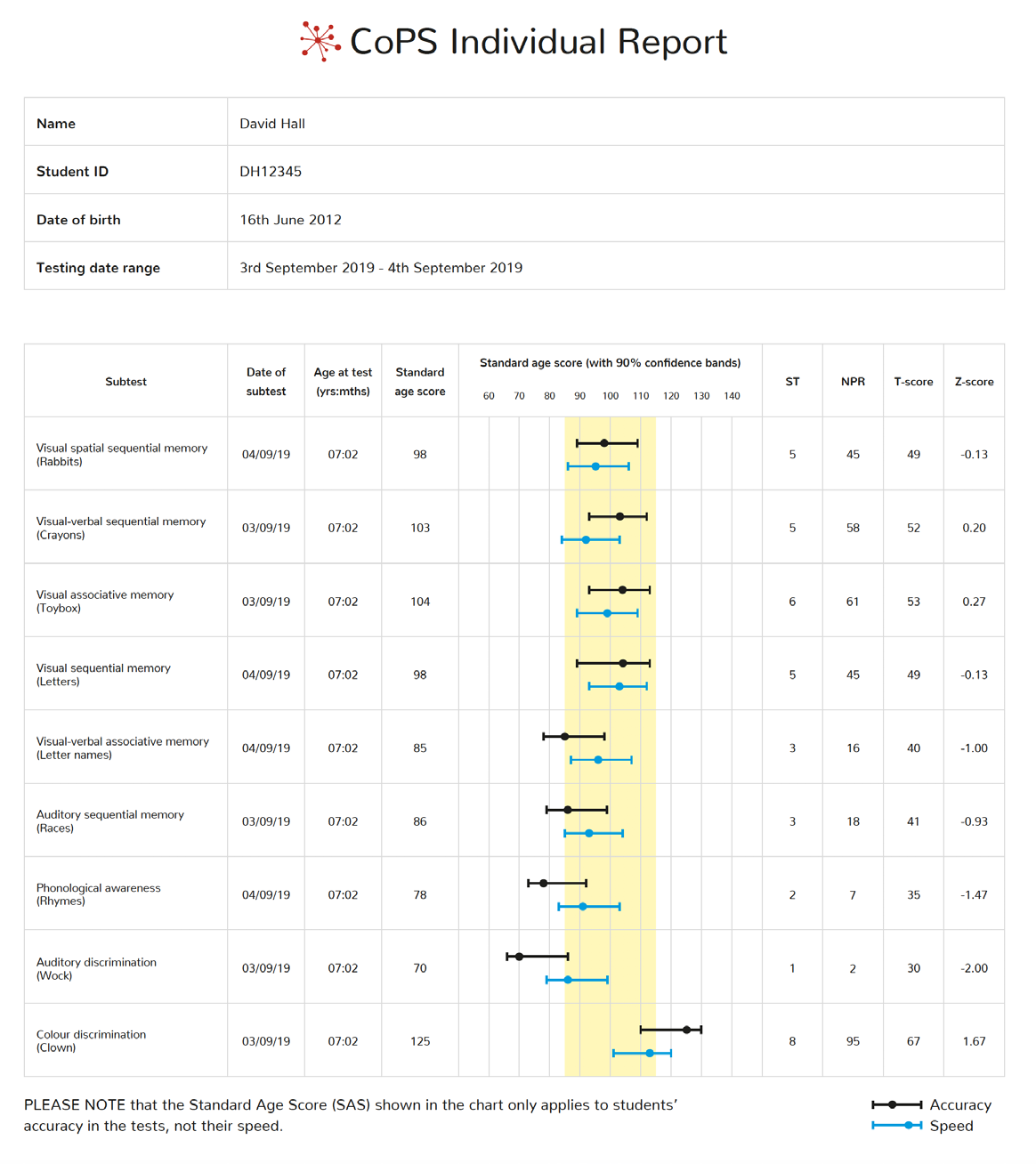 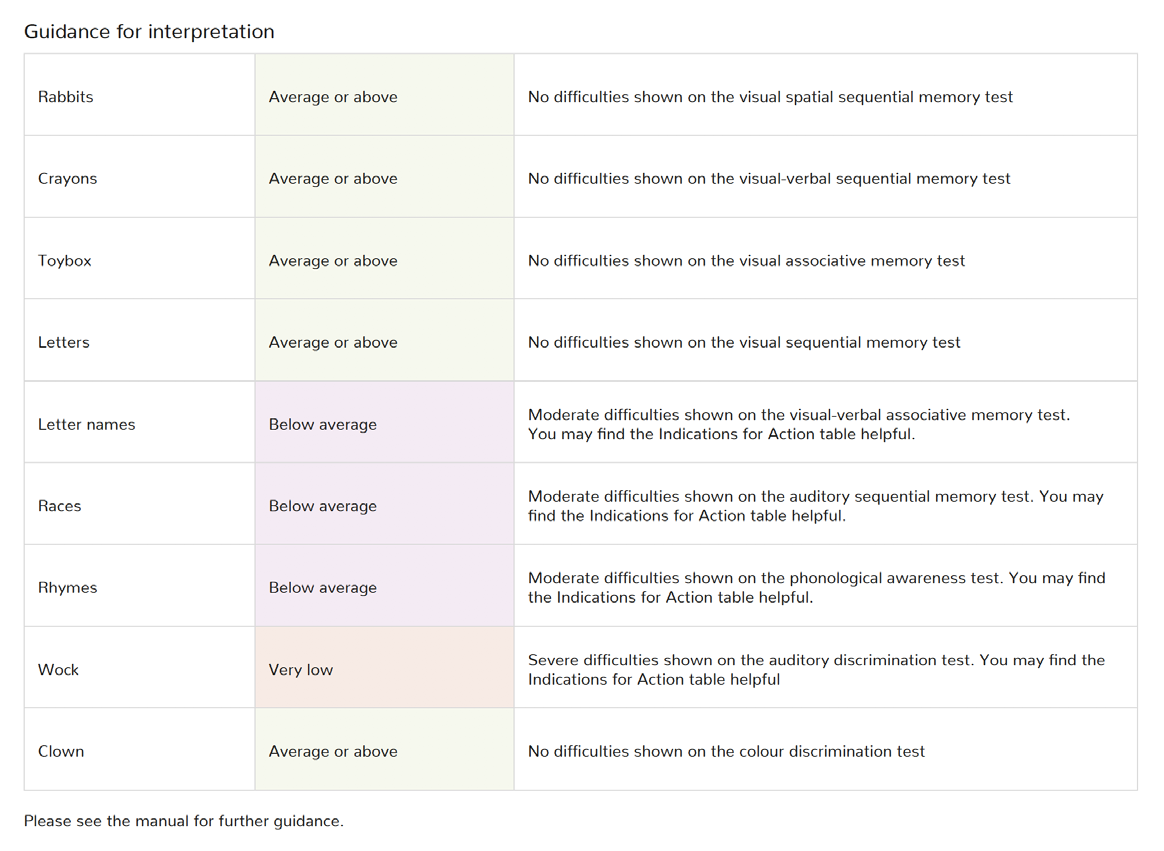 Previous: Interpreting results of the phonological subtests Next: Rhymes